The basis of nearly all document conversion personalities is the ViewExporter adapter.

The ViewExporter is a complex adapter. Basically, it connects two 'main' sub-adapters: a disassembler (which breaks a document granule into smaller granules) and an assembler (which takes the granules coming out of the disassembler, and builds the desired end-result).

First, we'll enhance the top-level configuration file so it knows about the new personality we're going to build.

Change the top-level config.ini (i.e. the config.ini which resides next to Export.jsxbin). Initially it it looks similar to this (I've omitted most comments for brevity).

This tells Crawler that we want to select 'tutorial', and it also says that the personalityConfig entry needs to be the lower-level config.ini inside the Tutorial folder inside the Personalities folder.

We also switch on debug monitoring, and hook a Debug Monitor into the inputSplitter adapter inside the ViewExporter.

Now that Crawler 'knows' about the new personality, the next step is to make a start building it.

Open the Personalities folder, and create a new subfolder called Tutorial. Inside that subfolder, create a text file called config.ini. 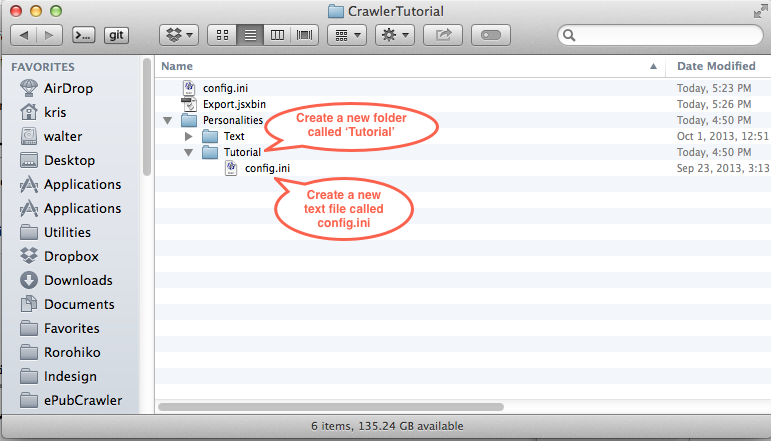 Put the following text in this personality-level config.ini file:

With this config file, we tell the ViewExporter that we only need a single view, named tutorialView.

Later on, we'll build personalities with multiple views. Views are a way to concurrently build separate, but related files.

For example, when converting to XHTML, we need to build a CSS structure as well as an XHTML structure, and keep track of how they relate to one another.

This kind of 'interrelated' file building is handled through views in Crawler.

So for XHTML+CSS conversion, we'll have two views.

For this first tutorial, we don't have a need to build multiple views concurrently, so we can make so with just the single tutorialView.

We'll be processing InDesign documents, which have a 'natural' hierarchy:

This is not the only hierarchy we could use in InDesign documents. An alternate hierarchy would be

This alternate hierarchy does not 'map' onto the first hierarchy: text frames do not map cleanly onto paragraph boundaries or vice versa.

In this case, we're initially interested in getting the text, and we don't care too much about the lower level granules, so all we tell the disassembler:

This tells the disassembler: if you see a document granule, please find a way to disassemble it into text.story granules.

A disassembler never take granules away: it will only add to the input stream. So the original document granule will still be output, but it will be preceded by the text.story granules extracted from the document.

Later on, we'll tell the disassembler to dig deeper than that.

The nesting entry is a slash-separated list of class identifiers, which represent some granule classes. The expression

is actually shorthand for:

because Crawler allows granule class identifiers to be shortened by dropping the com.rorohiko.granule. prefix.

Our rudimentary personality is not complete yet, but we can already try to run it.

We won't get any meaningful output just yet, but we've configured a debug monitor, and a log file, so we'll see some useful information there.

We can see the OutputTextFile adapter is unhappy (Error: OutputTextFile.prototype.dumpData_protected_: needs file) because it does not know where it needs to send its output. We'll fix that soon.

The area of interest are the granules that trickled through the adapter network: we can see we had two story granules, followed by a document granule.

Getting The Text Into a File

We'll now modify the personality-level config.ini a little bit so the text gets dumped into a file.

The sub-adapters used in the ViewExporter in Crawler look at a number of predefined context variables to determine what to do.

One of these many predefined variables is called FILEPATH.

The OutputTextFile adapter will query the context for a variable called FILEPATH.

If this variable is defined and contains a path to a file, then it the OutputTextFile adapter will dump its output into that file.

We can set the FILEPATH variable in the 'global' app context for the application by means of the personality-level config.ini file.

Contexts are arranged in a hierarchy; the 'topmost' context is the app context which we can influence from the config.ini file.

Change the config.ini in the Tutorial directory so it becomes:

The added entry FILEPATH... in the [appContextData] section defines a context variable FILEPATH.

Because Mac and Windows are different, we're using a selector to decide which FILEPATH to use.

Only one of the two entries shown will be used, depending on the platform we're using. The two selectors Mac and Win are system-defined.

This FILEPATH value is picked up by the OutputTextFile adapter embedded inside the ViewExporter.

You should now end up with a file called output.txt on the desktop. This file will contain all the text extracted from the InDesign document.

Now close all documents, and open or create just an InDesign book file that references a few InDesign files.

Keep all documents closed; only the book file should be open.

This time, you should end up with the collated text from all the book's documents concatenated together.

You might wonder how this could possibly work, given that the nesting in the config file does not mention book granules. You might expect that you would have needed to change the config.ini to read:

This longer nesting string book/document/text.story would also work for processing books, but it would not work for single documents.

When processing a single document, the initial granule that starts the process is a document, not a book. The nesting string book/document/text.story wants to see a book granule before it starts 'digging in'.

The shorter nesting string document/text.story is better, because it works for both books and documents.

The underlying mechanism works as follows: when we run Export.jsxbin, a granule comes down the line to be processed. It will be either a book granule or a document granule.

When it is a document granule, we get a match with the top-level nesting element, and the disassembly process can properly start.

If it is a book granule, there is no matching granule class at the start of the nesting string document/text.story.

When that happens, the ViewExporter will try to automatically pick a default approach to disassemble. We're not telling it what it should do with book granules, so it 'makes something up'.

Each of these document granules will then also be presented to the ViewExporter.

These granules do match the starting entry of the nesting string document/text.story and the 'normal' document disassembly will take its course from there on.

Change the config.ini to look similar to the following:

If you're on Windows, you'll need to adjust the file path so it points to a writable directory; the example shows the path to my desktop directory.

Disassembling Down To The Word Level

This setup will grab an incoming input granule (either a document or a book granule), and then gradually peel it apart, layer by layer, until it reaches the individual words hidden inside.

Auto-Discovery Of Word Granules In Document

The 'defaulting' mechanism mentioned in the previous section also occurs each time we have unmatched elements in the middle of the nesting string.

Essentially, without instructions from the nesting string, ViewExporter will try to 'dig deeper' into the data, disassembling level by level, until it either 'hits' the desired granule class, or comes up empty.

When a document is disassembled, the ViewExporter will try to match the next required granule class shown in the nesting string. In this example that granule class is text.word.

Documents don't disassemble readily into words. So, the defaulting mechanism kicks in, and the document is disassembled into some smaller granules. The default ViewExporter behavior is to disassemble a document into spread granules.

ViewExporter will now try to try to disassemble these spread granules to the desired text.word granule class.

Just as with document granules, spread granules don't split up into words, so it will again have to call on some default behavior.

The default is to disassemble a spread granule into frame granules. Some, but not necessarily all, of these frames will be text frames.

ViewExporter will now try to try to disassemble these frame granules to the desired text.word granule class.

For image frames, that won't work. It will try digging a bit deeper using the same defaulting mechanism at each 'level', but eventually it'll come up empty: there are no word granules to be found in an image frame.

For text frames, it will finally work: ViewExporter does know how to grab the contents of a text frame and disassemble it into words.

This finally satisfies the nesting string which was calling for text.word granules.

Stop Drilling Down When All Nesting Entries Have Been Matched

As the complete nesting string has now been matched, no further disassembly takes place. It will not try to disassemble the text.word granules any further.

The main difference is that we leave it up to the ViewExporter to figure out how it will get from document granules down to text.word granules.

As these granules come 'down the pipe' we need to re-assemble them again into some kind of output.

That's where the accepted comes in.

The output file will not look as good as before: all words will be running together without intervening spaces.

Currently, the source document is disassembled in story order: the disassembler goes into the document, then enumerates all the stories.

The text is output story by story, which does not take into account any of the story flow through threaded text frames.

To change the order, we can change the nesting string. Change your config to look similar to the following:

This nesting string tells the ViewExporter to start from document, drill down into frame granules (which it will do by way of the spreads).

From the frame granules, it then drills down into the paragraphs.

The view is then set to only accept text.paragraph granules.

This small change causes the document text to be output in text frame order instead of in story order.

The order of the text frames in the previous test is somewhat random, and not explicitly specified. If we wanted the frames to be output in a particular order, we can add ordering info to the nesting string.

Ordering is defined by a ordering class reference, which is prefixed with either a + (ascending) or - (descending).

Crawler is extensible, and additional ordering classes can easily be added to the system, and referred to from the config.ini file. These orderings could provide different kinds of orderings, or could be used for for different granule classes.

The following change makes the frames be ordered top-to-bottom; and for frames on the same vertical position, these are further ordered left-to-right.

Simply changing a + to a - reverses the ordering.